WordPress 5.0 has finally landed, are you prepared for Gutenberg? 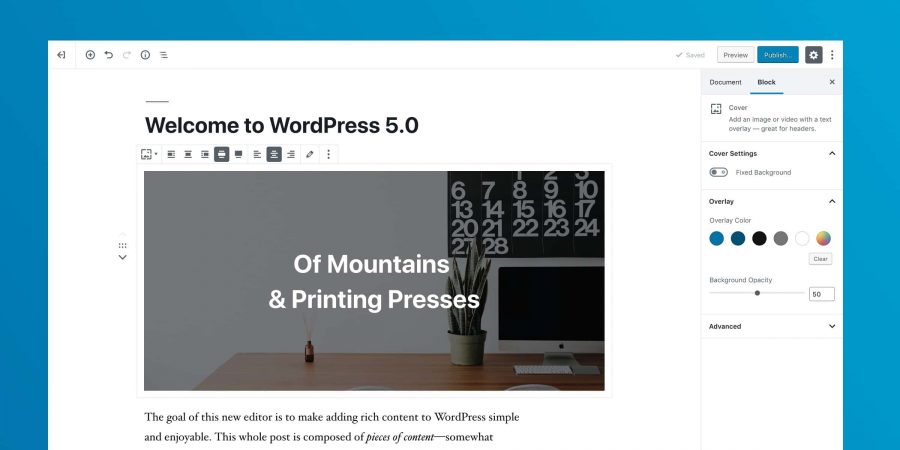 WordPress 5.0 has finally landed, are you prepared for Gutenberg?

Say Hello to the New Editor

We’ve made some big upgrades to the editor. Our new block-based editor is the first step toward an exciting new future with a streamlined editing experience across your site. You’ll have more flexibility with how content is displayed, whether you are building your first site, revamping your blog, or write code for a living.

The new block-based editor won’t change the way any of your content looks to your visitors. What it will do is let you insert any type of multimedia in a snap and rearrange to your heart’s content. Each piece of content will be in its own block; a distinct wrapper for easy maneuvering. If you’re more of an HTML and CSS sort of person, then the blocks won’t stand in your way. WordPress is here to simplify the process, not the outcome.

I am more of an HTML and CSS person, and after spending last night writing a post on another one of my websites, it DOES get in the way. Although I’m probably in the minority, I write all of my blog posts in the text editor of WordPress and not the visual editor. I manually add HTML and inline CSS markups as that is the fastest and most natural way for me. Obviously, for people who aren’t very familiar with CSS and HTML, the visual editor is the best choice.

The problem with Gutenberg is that it is forced onto WordPress users. Sure, there is a classic editor plugin that you can install. However, users are reporting incompatibilities with other popular plugins such as Yoast SEO. In my opinion, Gutenberg should have a core option of being enabled or disabled. An editor plugin shouldn’t be necessary to deactivate it.

If I only had one word to describe Gutenberg, I’d choose cumbersome. Each time you press the enter key a new content block forms. Thankfully, there is an HTML option you can switch to for each block. Most of the time when I added some CSS code or classes, I was told there was an issue and it needed resolving by WordPress. The options are to convert to a block (isn’t it already in block form?) and accept some strange code alterations OR convert that section into custom HTML. In some cases, when converting to a block, the code was exactly the same! What gives?

What Does the Community think of Gutenberg?

I’d love to see a survey on a massive scale conducted on the WordPress community. Votes would be for those that love Gutenberg or hate it. Scanning Google News all I come across is a lot of hatred towards WordPress 5.0. The Gutenberg plugin, which served as a test of sorts before the official rollout, has an overall rating of 2 stars. The vast majority of votes being 1 star.

There is no denying that the WordPress team is using their muscle to force the new editor on its users. They have the right to do so. It’s their platform, it’s free and the history they’ve achieved for web development has been astonishing. I just wish they could have gracefully implemented the new editor and have more consideration for their veteran users.

Right now, I’ve held off on upgrading Precise Online Management to 5.0. I’m sure many other designers, agencies, and developers are doing that very same thing. I don’t see any turning back on Gutenberg integration. We’re all just going to have to suck it up.